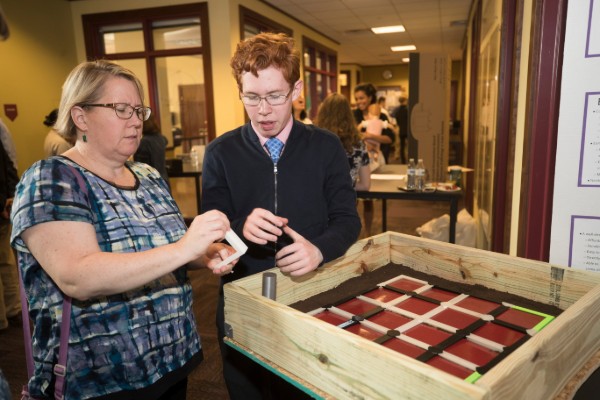 A summer mission trip to the Dominican Republic opened Eli Harrison’s eyes to an urgent health issue facing not only his newfound friends, but over one billion other people worldwide—and ignited his determination to help.

“[Other students and I] spent several days with families there, mixing and laying cement for a brand-new community basketball court,” recounts Eli. “But when I toured some of the families’ homes, I saw dirt floors. One of our group leaders explained how dirt floors can contribute to life-threatening diseases, and I knew I wanted to come up with an alternative flooring option."

Eli returned home, the problem weighing on him. As the school year approached, Eli and fellow Research Science classmate, Kevin Salipante, teamed up to investigate the issue. They discovered that dirt floors are among the world’s most significant causes of disease: during dry seasons, pathogens spread through the air as dust is kicked up; muddy puddles provide breeding grounds for mosquitoes when it rains. Replacing a dirt floor can reduce a child’s risk of dangerous diarrhea and parasitic infections by 49 to 78 percent, respectively, and improve cognitive development as much as 96 percent.

The duo soon realized that existing solutions—including concrete, and an earthen-floor product called EarthEnable—were beyond reach for many in developing countries due to expense and other drawbacks.

“Even if people had the tools and materials to make the floors themselves, they may not have enough time to create them, as laying an earthen floor is a fairly time-consuming process and would conflict with any jobs that they do,” wrote Kevin and Eli in their proposal to create a durable, affordable, easy-to-install and -replace modular tile system they named the Snap-In Tile System.

Inspired in part by SnapStone, which places porcelain tiles over an existing floor and locks them together without grout, the Snap-In Tile System offers an alternative made affordable by using recycled floor tiles, or manufacturing cheaper plastic tiles. To secure Snap-In’s tiles, the students used Fusion 360 CAD modeling software to design varying sizes of 3D-printed plastic pieces that snap into each other, consulting with Jaime Turek, Senior Program Coordinator of the Northern Area Multi Service Center (NAMS), as they developed their idea.

“NAMS mainly works with senior citizens, but Jaime had lots of previous experience working with refugees in camps, which is one group of people that could make use of our flooring system,” explains Kevin. “She gave us lots of good advice on how to improve our system and some future considerations for later stages of the project. For example, she suggested that we make sure the system could work in a variety of temperatures and talked to us about how distribution of the system could work.”

Piecing the Puzzle Together

As Eli and Kevin designed and 3D printed the pieces for securing tiles, iterations progressed from slots and spikes; to T-shaped, then L-shaped clasps; and finally to an improved L-shape that locked strongly, reduced gaps, and enhanced durability. In all, the Snap-In Tile System progressed through five major phases—including scrapping an initial, problematic design—and explored five different types of plastic.

The partners also built wooden frames to fill with dirt, and designed and 3D printed a dirt packer for compressing the loose dirt into the necessary density, to test their product.

The Snap-In Tile System would require further modifications before it could be implemented—for example, using injection-molded rather than 3D-printed plastic parts—but Kevin and Eli are gratified to know their project is on the right track.

“I would never want any of the friends I met to contract a bacterial disease,” says Eli. “We could conclude that our design would keep families off the dirt, meaning there was at least one more layer between them and bacteria-infested ground.”