“I’ll never forget what WT has enabled me to do and the knowledge it’s given me.”

Whether wielding a sword in stage combat, emanating grief through an evocative glance, or delighting an audience with brilliant clown maneuvers, Alec Silberblatt ’08 shines as a performer. His passion is theater and he is pursuing his dream of a professional acting career —a dream nurtured and encouraged at WT.

Silberblatt credits the arts faculty at WT for supporting his aspirations, and also points out how the academic rigor at WT prepared him for college and for his chosen path.

“[Drama teacher] Mrs. Barbara Holmes has been there since the beginning,” acknowledges Silberblatt. “She taught me how to act when I was younger, and got my first monologue for me when I was in the sixth grade. Ms. Kristen Graham (Klein) taught drama in our English class. Even today, my understanding of what a protagonist and antagonist [are] comes from her.”

During his senior year, Silberblatt auditioned in New York for the Pulitzer Prize-winning play Rabbit Hole. He won the role of Jason: a plum opportunity, and a potential problem. The play, a co-production of the Pittsburgh Public Theater and Hartford (Connecticut) Theater Works, rehearsed during the day and, after its Pittsburgh run, would travel to Hartford.

“Fortunately, WT’s flexibility allowed me to participate fully in rehearsals and shows while still completing assignments,” Silberblatt says. Not only that, but the school also saw the experience as a learning opportunity for Silberblatt and helped him integrate it into his studies. “I built my senior class project around this experience, and my entire senior class came to a student matinee at the Public. The school has always been supportive of me being an actor. If it wasn’t for them, I don’t know if I would have felt as encouraged to do theater.”

So when this young alum decided to give back, his thoughts naturally turned to the stage. Last June, Silberblatt performed his one-man show, One Joyous Act, at WT. Ticket proceeds from the comedy —which touts danger, audience participation, laughing, carousing, water and deodorant among its highlights —totaled $900, all of which Silberblatt donated to the Young Alumnae/i Scholarship Fund. Initiated in 2010, the Fund has already benefited two Upper School students, and raised $27,645 from individual gifts from alums who graduated from Winchester Thurston in the past 20 years.

“Everyone…is entitled to a good education,” he affirms. “Any way we can help others to better their lives is more necessary today than ever before.

“WT gave me a lot,” reflects Silberblatt, whose WT education influences him even now. “I was nervous about doing this clown show…and finally I remembered what [WT history teacher] Dr. Mike Naragon told me every day in class: ‘Do what you do best.’…Every struggle I’ve had with the show comes back to that: do what I do best and make it simple. That’s one of the things I’ve never forgotten.

“I will always maintain my connection to WT in some way,” Silberblatt concludes. “I’ll never forget what WT has enabled me to do and the knowledge it’s given me.” 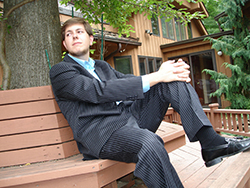 “I wanted to leave some mark on this institution that has meant so much to me.”

“I can honestly say that I can’t imagine having a better foundation than that which WT gave to me,” declares Gerard Michael D’Emilio ’07. “The overall faculty quality at WT is unbelievable. I still maintain close connections with several teachers—their knowledge, support, and expertise undoubtedly made me who I am today.”

As a Winchester Thurston student, D’Emilio distinguished himself in many ways, serving as Vice President of his senior class; garnering numerous awards for academic performance, including the Mary Campbell Award, the Virginia Ann Sheppard History Prize, the Williams College Book Prize, and the Senior English Award; and winning the Gene Kelly Award for Best Supporting Actor for his portrayal of Officer Lockstock in Urinetown.In addition, D’Emilio’s original musical Peasants! The Musical received the Scarborough Arts Award, and a junior research paper was tapped for The Concord Review, which publishes exemplary history essays by high school students from all over the English-speaking world.

As an alum, D’Emilio is making another kind of contribution to the WT community: his annual gift to the school, which means as much to him as any other, and maybe more. “I hate to reference John Kennedy’s famous words, but I think I must. When you are a student, you constantly ask what your school can do for you. But as an alum—who has been given so much by this institution—I think one ought to be asking what they can do for their alma mater. WT runs on the generosity of alums and parents, and it was the least that I could do to give a small amount back to a school that enabled me to do what I love to do.”

“I can’t tell you how easy Oberlin has been because of my time at WT. Mark my words—there is not a better school in the country, let alone Pittsburgh, than Winchester Thurston in terms of college preparation, individualized instruction, and nurturing intellectualism.”

D’Emilio’s deep appreciation for WT has only increased since his student days; having worked in the Development Office for two summers doing everything from database entry work and advertising, to making donor thank you calls and assorted miscellaneous tasks, he has gained a different perspective on the school.

“I’ll admit—I was not immune to the typical kvetching about the cost of Winchester Thurston when I was a student,” he confesses. “However, working in the Development Office definitely changes your perspective on things. Tuition only covers 86% of the cost of each student’s education, so it really helps to clarify the importance of giving. Beyond this, being on the inside makes you appreciate what each and every employee does on a daily basis. You never truly realize all the intricate gears that go into running the mechanism that is WT until you become one of those parts.

“I wanted to leave some mark on this institution that has meant so much to me,” concludes D’Emilio. “I will always consider WT, above all other institutions, my alma mater, my home. It allowed me to pursue both music and academics, to perform and pontificate, to ponder and create. It is cerebral and physical, an institution that seamlessly combines careful thought and active application. My confidence, my abilities, my love of learning—all these things and more I have because of Winchester Thurston. It is an open community, a place where students can truly realize their dreams, a school that absolutely allows for uniqueness and courage.”