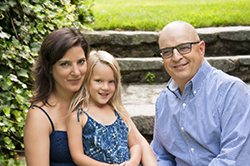 When she looks back on all of her educational experiences, Kathleen Metinko ‘91 credits her four years at WT as the most significant. “I really feel it was the stepping stone and the start. WT had the most significant impact on my learning...We were not ‘taught at,’ but rather we were taught how to think, how to learn, how to question.”

Metinko began her WT career as a freshman after attending public schools. Her parents felt strongly that she should have a high school experience that would truly challenge her, and that would open up more opportunities for her in college and beyond. “There were less costly options than WT,” she recalls, “but I really, really wanted to go to WT. When I visited, I loved the fact that there was such breadth of opportunity, from Japanese and Russian history to the dance program. It was a ‘college-esque’ environment, where I could explore what I really wanted to learn.”

A scholarship enabled Metinko to enroll. She notes that the fact that she was on financial aid never set her apart socially. “WT felt like a welcoming environment right from the first day,” she says.

Academically, she found the challenge she and her parents had been looking for. “All through elementary and middle school, I had been in the gifted program, and I had never gotten a B in my life! Now I had to learn how to write papers and to manage a much higher volume of work.” The rigor prepared her well for college, law school, and her demanding career as a Partner in Special Acquisition Services at Deloitte in New York City.

Despite having moved away from Pittsburgh, Metinko stays actively involved at WT. After serving on the Young Alumnae/i Leadership Council, she joined the Board of Trustees in 2010. Attending Board meetings gets her to Pittsburgh regularly, which is great for her parents and her daughter, Alexandra. But Metinko’s desire to stay involved at WT connects back to her own experience, and the opportunity she has now to provide for future students whose stories are similar to her own.

“WT is an important part of who I am; I wouldn’t necessarily be where I am today if the school hadn’t taken a chance on me and provided me with amazing opportunities. Now I’m in a position to make sure others have the same opportunities I did.”

Moreover, she feels proud that WT has remained an academically rigorous school that “is on an amazing trajectory. I want to make sure it keeps going, and keeps providing great opportunities for young people in Pittsburgh.”

So Metinko has made WT a philanthropic priority, supporting the WT Fund at a leadership level each year, supporting the Celebrate WT campaign with a major gift, and making a provision for WT in her will, joining the Miss Mitchell Society. “Here in New York, there are lots of private schools with large endowments, and I see how these resources allow them to thrive,” she says. “Schools like WT are really important; the world would be much worse off without them. So WT needs to stay strong, and to do so, it needs to continue increasing its endowment.”

As part of her role on the Board, Metinko meets with fellow alums about giving to WT. Her message to them: “As an alum, think about what WT meant to you, how impactful it was to who you are. WT is a community. A gift, no matter the size, can have an impact on someone else.”