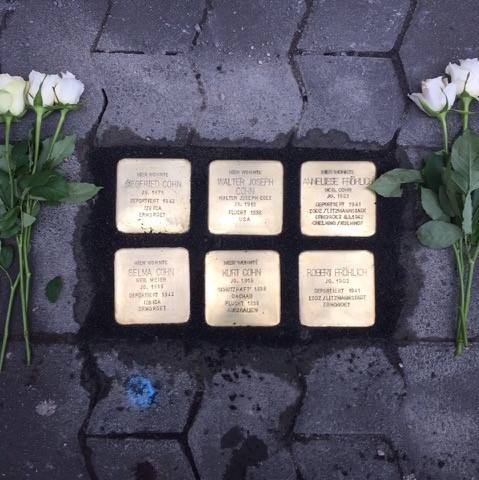 In teaching history, we hope as historians to connect the past to our students' lives in some way. We want them to feel connected to the material we are learning. In the years I've spent developing our course, Genocide & Holocaust Studies, weaving personal narratives and individuals' experiences into the thread of history has been a singular focus. Many years ago Dr. Rachel Korazim, a scholar who visited WT from Jerusalem two years ago, told an audience that in order to understand the totality of the Holocaust and the over six million Jewish victims of Nazi violence we must look at that number as the equation: 1+1+1+1+1+1... each life must be remembered. That has been my goal in teaching this class — to bring in as many individual stories in order to see the past through a personal lens.

Last week, our class partnered with current WT parent Emily Loeb so that she could join us and tell the story of her grandmother, Ilsa Dahl, who fled Nazi Germany in the days following Kristallnacht, the Night of Broken Glass. Emily's story of her grandmother was all the more powerful to our students because Ilsa was just a few years older than the students when she had to leave her family, her town, her country. Ilsa's story allowed our students to understand the rise of the Nazis in Germany from one family's perspective and how friendships were broken, rights were stripped away, and communities were destroyed over time. Our students asked pertinent questions to understand how Ilsa, who attended the local Catholic school in her town of Geilenkirchen, near the German-Dutch border, was treated by her peers after 1933. Emily also asked for feedback from our students. This was her first presentation to high school students, an audience for which she built the presentation in order to present through the Holocaust Center of Pittsburgh. Moved by the story, our students offered pertinent feedback and wanted to know more.

Emily returned to Geilenkirchen this past November, the granddaughter retracing Ilsa's journey in reverse. Attending the commemoration of the 80th anniversary of Kristallnacht, Emily engaged our class in a discussion of how historical memory and remembrance play out in Germany and this one town. The town holds a memorial service in the Lutheran church; then together, they somberly walk through the town to the Jewish cemetery, where Emily can see the history of her family in the town, a family history that can be traced back over 220 years in one place. Emily and her uncle met with high schools in Ilsa's former school, which is still in the same building as it was in the 1930s. Throughout Europe, one can see Stolpersteine, stumbling stones, embedded in the sidewalks outside former Jewish homes. These brass markers are a memorial to the lost past, made to force you to stop, to look, and to think about the loss of what was and what might have been for the Jewish communities of Europe. Below you will see, courtesy of Emily Loeb, the Stolpersteine of her family – the Dalhs and Cohns. One can read on the brass memorials that Emily's great-grandparents, Ilsa's parents, were deported to the Izbica ghetto in Poland in 1942, where they were murdered.

To bear witness is more than to empathize with those victims of the past. It must be an active moment of understanding the past, armed with the knowledge to remember individual stories, but more importantly, to move from being a bystander to an upstander. When we witness wrong, whether it is hate or bullying, or the beginnings of such in a cruel joke, we are armed with the knowledge of the past and how these events began with bystanders turning away; thus, we must act, we must speak up in those moments. We must stand with those being victimized.